Ever since I watched (and fell in love with) Spirited Away, I have been constantly told that there is another Studio Ghibli film that if not better than Spirited Away, is of the same caliber. That film was Princess Mononoke. I’ve finally gotten around to seeing it (the English dub) and here are my thoughts.

Princess Mononoke takes place in Japan during the Muromachi period (1337-1573). In this land though exist humans, gods, demons, and other interesting creatures. Literally 3-4 minutes into the movie, a young prince named Ashitaka, voiced by Billy Crudup, is attacked by a demon boar. Ashitaka successfully kills the boar, but not before the inner demon inside the boar leaves its mark on Ashitaka slowly turning him into a demon himself.

Searching for a cure for this curse, Ashitaka sets out on a quest to find the Spirit of the Forest who he believes can help. Along the journey, he comes across a monk/mercenary named Jibo, voiced by Billy Bob Thornton,

and the eponymous human princess who has been raised by wolf gods, Princess Mononoke, voiced by Claire Danes.

As he interacts with these people, his eyes open to a battle between human and gods, between humans and animals, between industrialization and nature, and between him and most everybody else.

Let me just say that this movie’s praise is well-deserved. This film is really good! I personally think Spirited Away is better than it, but it doesn’t take anything away from this film.

What makes this film good? Well, there are many things. Firstly, I’m a fan of the themes presented in the movie…well, more so in how they were presented. For example, a big aspect of the film has to do with the industrialization vs. environmentalism debate. The movie doesn’t say that any side is wrong or incorrect. Yes, the film has a bias towards one side, that being the side of environmentalism, but it still doesn’t fully disparage the industrialist side either. It shows the harm that may come from industrialization, but also the benefits that industrialization brings to mankind, individually and collectively.

The film also deals with issues of fate and dealing with things that may seem out of your control. It teaches us that we still have to strive towards a goal we want in life before we can say “This is impossible.” or “It’s totally hopeless.”. Sometimes miracles can happen that grant us the successes we want; sometimes we can’t get what we want in life. But, we still have to strive!

Secondly, the characters in this film are pretty well-written and able to be identified with. In fact, Lady Eboshi is probably the most complex female character…or maybe even character…that I have ever seen in a film. She’s an iron magnate producing and selling iron to keep her town and citizens thriving. She’s an enemy to all animals and gods in the forests and shoots them without thinking twice.

She’s a compassionate ruler who gives rights to women and lepers all while not looking down upon men or saying that women are better. She’s willing to work with mercenaries to kill the gods she needs dead. She allows people with different points of view/following different schools of thought to voice their opinions/do what they think is right and apologizes when she’s wrong. She has no desire for any part of the forest surviving and wants to make Princess Mononoke a human being again. Is she a heroine? Is she a villain? Should we love her? Should we hate her? The questions never end.

Thirdly, the animation in this film is extremely gorgeous and creative just like we expect Studio Ghibli films to be.

The last thing, I have to say about this movie is that it’s rated PG-13 and rightly so. This is probably the most violent, gory, and bloody film that I’ve ever seen in my life (I generally don’t watch R-rated movies with a few exceptions)! People are decapitated, people’s arms are chopped off, animals are killed, animals are bleeding, etc. Just look at some of these screenshots! 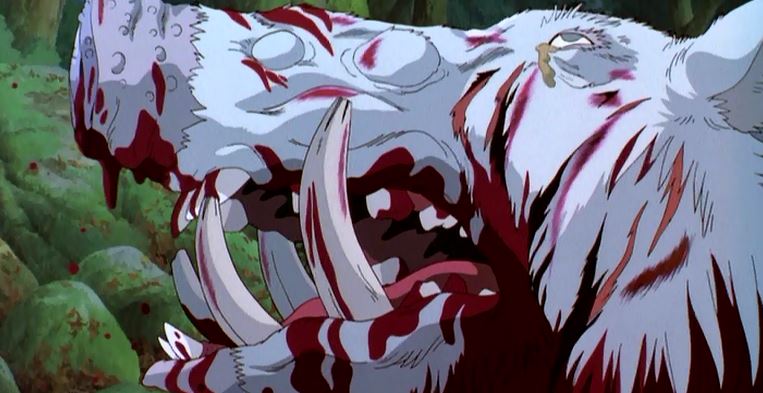 Yeah, it’s a bloody…bloody film. There is also talk of prostitutes and brothels, so this film is definitely not child-friendly. But, if you’re old enough and a fan of Studio Ghibli, I recommend that you check it out.