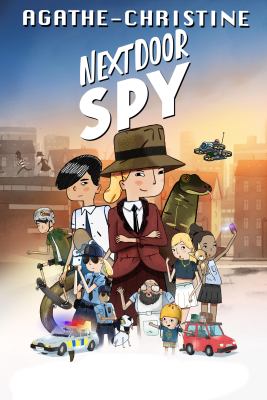 Tricoast Entertainment very graciously gave me early access to the animated film, Agathe Christine: Next Door Spy. This is an English dub of the animated 2017 Danish film, Nabospionen. Read on for my thoughts on the film!

The film is about a young girl named Agathe Christine (most likely a tribute to the mystery writer, Agatha Christie) who is moving to a new city with her policewoman mother, older sister, and toddler brother. She isn’t happy about the move and spends a lot of time fantasizing and being imaginative.  Her biggest fantasy is being a detective, so much so that she has her own detective agency in the basement of her house.

She gets her first case when she’s asked by a store owner to find the culprit who’s been stealing merchandise from his store. Solving this case requires her wits, imagination, and some surveillance technology. It also allows her to meet new friends and even develop a love/hate first crush.

The film does a great job showing us a young girl character dealing with change while following her dreams at the same time. The film is charming to see her develop in her relationships as well as deal with all the feelings that she’s dealing with. She also isn’t a perfect character and gets into trouble quite a bit, even causing another character to run away from home.

The animation is presented in a cute style that befits the tone of the story as does the voice acting. The language does get PG/PG-13 at times though, so bare that in mind. All in all, I think this film is an enjoyable escapade that everyone will be satisfied with after viewing.