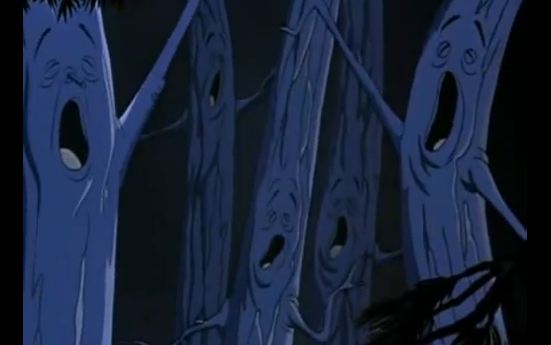 When I started this project, I mentioned that the characters that I’d choose would be major, but forgotten; or minor and unmemorable; or just in the background and caught my attention. Today’s entry is mostly of the latter category.

Before we get to them, let’s first make it clear where we are. We are in Disney’s 9th animated film and his 4th package film, “Fun and Fancy Free”. Released in 1947, this film mainly consists of two segments with a tie-in by Jiminy Cricket and ventriloquist Edgar Bergen and his dummies. 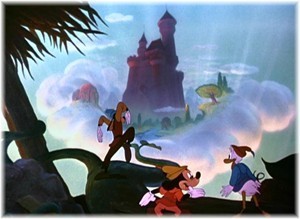 The short is great and fun and also introduces the semi-villain, Willie!

No! Not that one! Willie the Giant actually!

Yeah, be afraid! Be very afraid!

But today’s forgotten character is found in the first segment, “Bongo”. Bongo is a popular circus bear, who after being mistreated for so long, breaks free of the circus and goes to live in the wild. 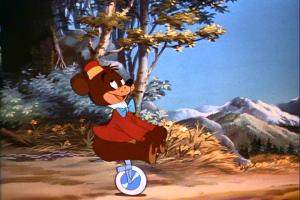 He has to adjust to the forest life and meets other bears including a love interest, Lulubelle,

and a romantic rival, Lumpjaw! 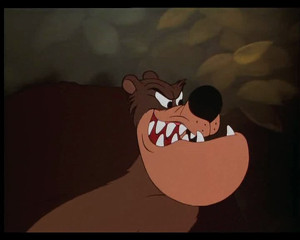 Yeah, quite romantic, I know!

The segment itself I place in the category of the more boring of Disney segments. The animation is great, but the story falls flat; at least to me.

But anyway getting back to my characters of choice: When Bongo spends his first night in the forest, the film cuts to various animals being sleepy and yawning and “hitting the sack”. And at one time the film cuts to these trees yawning and ready to sleep. Now, that scene lasts for only like 2 seconds; but it’s never explained, never acknowledged, and honestly it was the most interesting thing about this segment! It captured my attention, I mean the trees are alive (anthropomorphically speaking)! When have we ever seen trees as actual moving creatures in fiction? 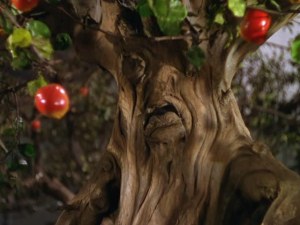 Aargh! Anyway, the Yawning Trees are my pick for this movie, and I wish Disney could make a film revolving around these characters!