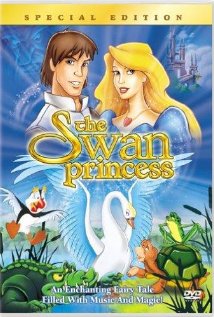 Let’s talk a bit about a man named Richard Rich.

Richard Rich was an employee at Walt Disney Studios. He started in the mail room and worked his way up until he became an animation director as well as co-director for films such as “The Fox and the Hound” and “The Black Cauldron”.

In 1986, he left Disney to form his own animation studios called “Rich Animation Studios”, now known as “Crest Animation Productions”.

For this studio, Richard Rich would produce and/or direct many animated films including “The King and I”, “The Scarecrow”, “The Trumpet of the Swan”, “Muhammad: The Last Prophet”, “Alpha and Omega”, “The Little Engine That Could”, and a handful of educational/religious direct-to-video releases among others. But his most famous film by far is the subject of this review, “The Swan Princess”.

The film, based on the ballet, “Swan Lake”, features a King William and a Queen Uberta (voiced by Dakin Matthews and Sandy Duncan, respectively) who rule different kingdoms. They get along amazingly with each other and wish to bring their families and kingdoms together through the marriage of their kids. They plan to meet every summer so that the kids can grow up together and hopefully develop a bond of love and a desire to marry when they become of age.

But as the kids are still young, they understandably dread these visits and pretend to hate each other. But, all that changes when they reach adulthood and they realize their true love for each other.

Prince Derek (voiced by Howard McGillin) is even ready to marry Princess Odette (voiced by Michelle Nicastro), and she him, yet this awkward conversation takes place. 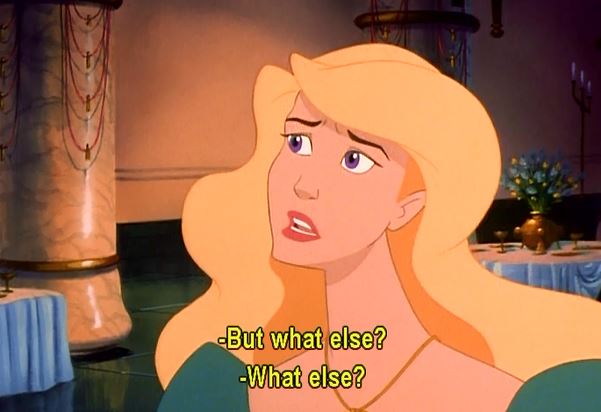 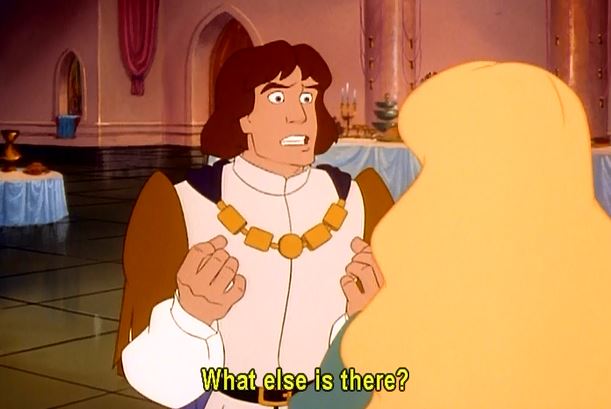 And because of stupid Mr. Derek, the union fails. Wow, that’s a very different turn for a prince/princess story! (Ok, I’m being unfair to Prince Derek. The movie makes it very clear that he’s not a jerk who only values beauty, but he’s just someone who was unable to get his feelings/the right words to come out correctly.)

When King William and Princess Odette head back home with their entourage dejectedly, they’re ambushed by an enchanter named Rothbart, who was banished from King William’s kingdom years before after attempting to take over the kingdom.

Rothbart, voiced by Jack Palance, has the ability to transform into a mighty beast and attacks King William’s entourage in this form.

He eventually kills King William and the other soldiers and kidnaps Princess Odette.

He then takes Princess Odette back to his secret hideout where he places an incredibly weird curse on her. He curses her to take the form of a swan…but only temporarily. Every night when the moonlight hits this particular lake (and as long as Princess Odette as a swan is in the lake), Princess Odette is transformed BACK into a human until the moon sets again. Then, she turns back into a swan. (This stupid curse leads to SOOO many plot holes, but I’ll get to them later). He hopes that she’ll marry him and hence inherit her kingdom.

When Prince Derek hears about the attack, he vows to find Princess Odette and the rest of the film is about his journey to find the Princess and the obstacles that both he and she have to overcome.

Now, this movie has some VERY BLATANT plot holes and things that don’t make sense! Let’s start at Princess Odette’s swan dilemma. First of all, Princess Odette as a swan CAN fly away from her captor! She’s not bound to the lake nor to the secret hideout. Understandably, she can only turn into a human when she’s in that particular lake, so maybe that gives her an incentive to not leave. But when she DOES become human, she has AMPLE time to get back to her kingdom and explain the situation to her people before she turns back into a swan! By then, she can amass an entire army to attack Rothbart’s hideout and get him to reverse the spell!

Secondly, why does Rothbart put Princess Odette through such a STUPID spell? Why not just imprison her or something? At least that way, he knows that she can’t ever escape! He actually does imprison her, but only near the END of the movie! Or if he wanted to go through with the curse, why not use an actual menacing curse or a more permanent curse? Like, why not just transform her into a swan and let her stay that way until she agrees to marry him? Rothbart, you’re failing as a villain!

Despite these and many other plot holes

I honestly LOVE this movie!

I know, it’s weird! This is the first time that I’ve seen it, but I totally understand why this movie has such a fan following and spawned a number of sequels! What are some things that I like about this movie? Well, I really, really love the courtship of Prince Derek and Princess Odette!

Coming from a culture wherein arranged marriages occur, I feel that many times when the West thinks of arranged marriages, they automatically associate it with FORCED marriage, i.e. “you’re marrying him/her and that’s that!”. And yes, there are many examples of forced marriages around the world, sad to say!

But at the same time, there are many ARRANGED marriages that occur which are NOT forced. And the whole process of arranged marriage/courtship is pretty much exactly what Prince Derek and Princess Odette went through. Their parents feel that the kids are a match for each other and do all that they can to let the kids know one another, grow together, have life experiences together, and hopefully kindle and develop a love for each other. But at the end, when Princess Odette refuses the marriage proposal, the King and Queen don’t force the marriage on them! The King actually responds with:

And that’s the essence of a TRUE ARRANGED marriage: the parents (or other matchmakers) doing their best to match two people together, to arrange a marriage, yet the final decision rests solely with the people involved AND the decision is respected! This is a method of courtship that is so rare in Hollywood films, and I strongly congratulate “The Swan Princess” for showcasing this method!

This film also has quite enjoyable animation. The colors are nice and the animation moves wonderfully; there aren’t any sudden jerks/scratchy lines or anything like that. There are also many songs in this film with the lyrics written by David Zippel, the same guy who would later write the lyrics to Disney’s “Hercules” and “Mulan”. I won’t say that all the songs are GREAT, but they are at least GOOD! My absolute favorite is the song, “This Is My Idea” which is played near the beginning of the film as we see a montage of Prince Derek and Princess Odette’s summer meetings.

When all is said and done, this film is FAR from perfect, but I’m extremely glad that I saw it.

I don’t know what exactly is the main reason that I love this film, but I definitely recommend it for anyone who hasn’t seen it yet!