So I’ve finally seen this film that (hopefully) ends the “Madagascar” franchise with a trilogy! I was never a fan of the “Madagascar” franchise and never thought much of the other two movies! So the fact that I actually LIKE this movie is somewhat of a shocker! And although I do like it, I also think that it’s not a great movie nor is it perfect. So with that in mind, let’s take a deeper look into this movie and my thoughts regarding it.

First off, what’s the story? Our friends from the New York Zoo, Alex, Marty, Melman, and Gloria still want to go home. However they’re stuck in Africa and have to go to Monte Carlo to pick up the penguins and the monkeys before they can go to America. They arrive in Monte Carlo, in an extremely forced manner, and the first twenty minutes of the film is them escaping , causing chaos, and wreaking havoc. 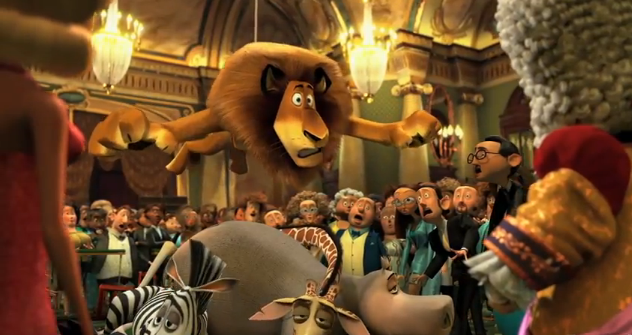 They find an enemy in Animal Control official, Captain Chantel DuBois, who is seeking to catch them because she wants to collect a lion’s head for her sadistic taxidermy collection. She also possesses a weird superpower to….sense/smell animals and visualize what they have been doing even if behind closed doors. 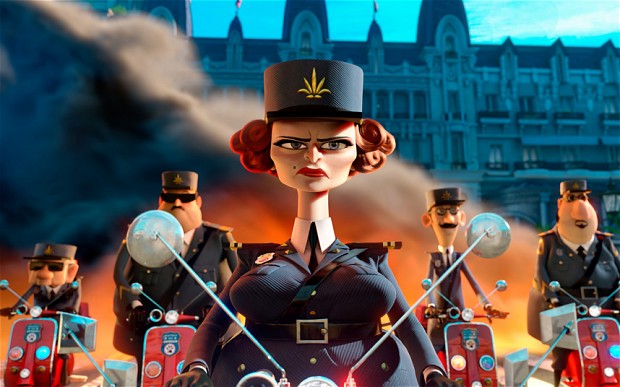 Anyway, the animals flee and arrive at a circus train. They have to pretend that they are circus animals in order to sneak aboard! The rest of the movie deals with their relationships with the circus and its animals as well as their journey back to New York, all while staying clear of Captain Chantel DuBois.

Ok, let’s start with what I don’t like about this movie. I don’t like the first third of this film! I believe the whole Monte Carlo scene is extremely rushed and forced and I also believe that the rest of the first third is stupid and boring! I also was never a fan of Ben Stiller, Chris Rock, David Schwimmer, and Jada Pinkett Smith as the voices of the main characters; and this film did nothing to change that! I also didn’t like the fact that many characters were not focused on much nor utilized much! Melman and Gloria have little to do with anything in the story. Marty, although having a bit larger part, in the end still has little to do with the story. King Julien is played for laughs by giving him a romantic partner in a circus bear that quite frankly disturbs me.

And poor Maurice barely has 4 lines in this movie!

The focus of the movie is mainly Alex and the circus animals with the Animal Control officer appearing every now and then!

Now, what do I like about this movie? Well, I love everything else! Once the first third of the movie is completed, I actually find myself enjoying the latter two-thirds! The circus animals are extremely enjoyable and surprisingly well-voiced!

The animation is superb, especially when we get to see one of the latter performances of the circus animals!

In the end, I have to say that this is my favorite “Madagascar” film despite its problems! I’m glad I saw it and I may even watch this one again!

And before I go, say it with me everybody!