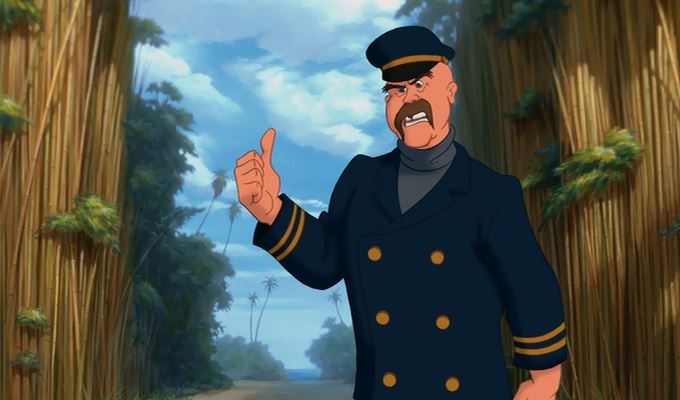 Sadly, we arrive at the end of the Disney Renaissance!

Well, all good things must come to an end eventually! And this particular era eventually ended in 1999 with Disney’s 37th animated feature, “Tarzan”. Warning: there are some spoilers in this post, so beware if you haven’t seen the movie!

“Tarzan”, based on the “Tarzan” stories written by Edgar Rice Burroughs, tells the story of a boy who grows up amongst jungle animals.

When he becomes a man, he discovers other human beings for the first time. They are Jane, his eventual love interest,

no, I mean, PROFESSOR Archimedes,

Your name isn’t even Archimedes! I’m talking about PROFESSOR Archimedes Q. PORTER, the father of Jane,

and Clayton, the eventual villain.

The professor and Jane are in the jungle to study wildlife, gorillas particularly, and they’ve hired Clayton to be their bodyguard. But, Mr. Clayton, has different intentions: he plans to capture all the gorillas and sell them for three hundred pound sterling a head!

And it’s only by getting Tarzan’s love and trust can any of the three find the gorillas!

As I’ve mentioned before, this is a movie that I saw once when I was younger and didn’t like it; but after re-watching it recently, I fell SO MUCH in love with it (mostly for the awe-inspiring animation) that it became one of my top 13 favorite animated Disney films!

But all that’s besides the point, we’re here to discuss the forgotten/minor character of this movie and the one that I’ve selected is the ship captain!

He’s the captain of the…well, the ship.

If I may elaborate, thank you! He’s the captain of the ship that the professor, Jane, and Clayton traveled to Africa with from England. After unloading the passengers, he leaves and returns at a predetermined date to pick them up and return them to England.

Anyway, the movie plays out, the gorillas are found, the villain does his villainous deeds, and the end of the movie is nigh! The captain rows the professor and Jane to the ship; but they both decide to jump out of the boat and stay in the African jungle!

The captain of course, is puzzled by their peculiar choice of action and is instructed by the professor to return to England empty-handed and announce that he couldn’t find either Jane or the professor!

Anyway, definitely forgotten, but not quite minor; the ship captain is our subject of focus for this movie!