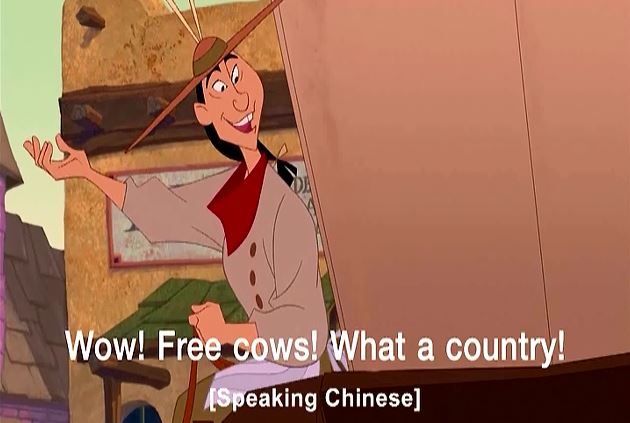 I apologize for the lateness of this post; it took me a while to obtain a copy of today’s film, “Home on the Range”.

So, without further ado, let’s get right to talking about the film!

The film is about a cow voiced by Roseanne,

who joins a new farm called “Patch of Heaven” after her original farm was attacked and all the other cows stolen. Only a nefarious, twisted, evil villain can commit such a horrendous act, right?

No, it’s actually been committed by a quite overweight, Western, yodeling, cattle-thief and land-grabber!

Anyway, before the Roseanne cow can settle into her new home, another problem arises. Apparently the owner of “Patch of Heaven” owes some money to the bank and if she doesn’t pay it in time, the farm and all its animals will be sold! Ah, the horror! But our heroine Roseanne cow has an idea: why not capture the nefarious Alameda Slim themselves and use the reward money to save the farm? Brilliant!

And the rest of the movie is about her trying to capture Slim with the help of two other cows voiced by Dame Judi Dench and Jennifer Tilly.

Yeah, this movie isn’t all that interesting. But to be fair, it’s not all that bad either. The songs and music are decent as is the animation. Had this film been made by an independent animation studio, this would actually be a quite enjoyable flick. But because Disney has set the bar for themselves extremely high, this film ends up being quite disappointing and is often considered to be one of the weakest films that the Disney Canon has ever released!

But, let’s get to the focus of the post: our forgotten/minor character. This was a hard choice to make, because there are actually quite a lot of minor characters in this movie who are quite forgettable. You have Roseanne’s original owner, Mr. Abner Dixon,

and even a Steve Buscemi caricature semi-villain/negative character/bad person/capitalist cattle entrepreneur voiced by Steve Buscemi himself!

But in the end, I decided to dedicate this post to the Chinese man! Who’s he? Well, when Roseanne and the other cows are trying to find Alameda Slim, Roseanne comes up with the idea that they should join a cattle drive. This way, they’ll be taken to another ranch filled with cattle and where there’s cattle, Slim can’t be far behind!

And whose cattle drive do they end up being attached to: the Chinese man’s!

So what do we know about this man? Well, he doesn’t really do much except travel, love the fact that Americans give away cows for free, and hate the fact that some cows sing off-key!

And when he finally arrives at a cattle ranch, Slim arrives too and kidnaps all the cattle after taking care of the Chinese man and the other human caretakers around the area.

Now my question is, WHAT HAPPENED TO THE CHINESE MAN?!

We never see him again after he’s been captured and tied up! Did he escape? If so, how? And if so, did he stay in the country? Did he flee to a different part of the country?

And if he didn’t escape, what happened to him? Slim doesn’t seem to have a desire for human captives, so did the Chinese man just die and get eaten by vultures?