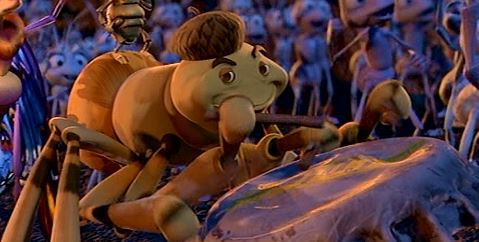 Pixar’s next film, A Bug’s Life, has an interesting history that most people know about. For those who don’t know, it’s basically a battle between Dreamworks Animation and Pixar to release their bug-related film first.

Despite losing that race, I would argue that the superior and better film of the two is definitely Pixar’s A Bug’s Life.

Taking liberties with the Aesop fable of The Ants and the Grasshopper, the film is about a colony of ants who have to feed a group of bullying grasshoppers every year in return for “protection from other bugs/animals”.

But when an ant named Flik, voiced by Dave Foley, causes a catastrophe that leads to the grasshoppers demanding more food from the ants, he’s sent to the city to find other bugs to help them fight off the grasshoppers. And just his luck, he happens to accidentally hire circus performers.

And the rest of the film is about how all the bugs work together to fight off the grasshoppers, be it with deception or lack thereof. The film, like I said is great. It has a great moral in standing up to bullies, has a simple, yet intriguing story, and has a lot of memorable characters. So in terms of choosing a forgotten/minor character, I ended up picking the drummer spider.

If you’re like me, you’ve never noticed this character before despite watching this movie multiple times. He appears briefly in one scene near the end when the ants capture Hopper, the leader of the grasshoppers, voiced by Kevin Spacey, and are about to shoot him off in a bug cannon.

And the drummer spider is there providing a drum roll before they shoot Hopper off. Now, he never says anything or does anything else in the movie besides drum. And I want to know, why not?

When fighting off the grasshoppers, I feel that a spider would be an immense asset in battle! Granted, they already had a black widow spider, but the drummer spider is brownish-yellow, which I’m assuming means that he’s more poisonous/dangerous than other spiders, hence providing a more serious threat to the grasshoppers. And greater numbers are always welcome in a fight!

Or he could have even helped more in constructing the decoy bird because of his web-spinning abilities. Granted again, that they already had the black widow spider to do that, but having two sources of webs could increase the speed of production as well as the overall quality of the bird! Unless this is an example of too many cooks spoiling the proverbial broth and only one spider was necessary for this job!