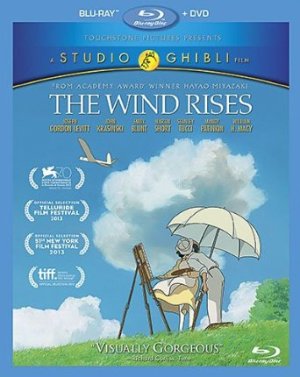 The Wind Rises was a Studio Ghibli film that I’ve wanted to see for a long time, but due to various circumstances, I wasn’t able to see it until last week. I had heard great things about it: It was a Studio Ghibli film inspired by true events rather than something fantastical, it was nominated for Best Animated Feature at the Oscars (with many people thinking it should have won the award instead of Frozen), and it was going to be Hayao Miyazaki’s last film ever as he was retiring!

So, did I end up enjoying this film and thinking it’s amazing as everyone says it is? Well, let’s take a look! (By the way, I watched the English dub of the film.)

The film is a somewhat fictionalized biopic of the Japanese engineer, Jiro Horikoshi, who designed many Japanese fighter planes in WWII. The movie begins with a young Jiro who dreams of being a pilot, but his bad eyesight prevents him from pursuing that dream. He decides to become an aeronautical engineer after having a dream in which the Italian aeronautical engineer, Giovanni Caproni, voiced by Stanely Tucci, inspires him that he can still be part of the airplane industry in this manner.

Jiro, voiced by Joseph Gordon-Levitt, would continue to have dreams throughout his life in which Caproni appears. This makes me wonder if these are really dreams or hallucinations of a sleep-deprived engineer slowly going mad.

Anyway, the film doesn’t really have much else going on besides Jiro working as an aeronautical engineer along with his friend, Honjo, voiced by John Krasinski. It’s only near the middle of the film wherein another plot point occurs. It involves Jiro meeting (and falling in love with) a girl, Naoko, voiced by Emily Blunt. Well, technically this wasn’t the first time they met. When Jiro was young (and Naoko younger), an earthquake had struck Japan and Jiro helped Naoko and her maid when they got injured due to it. Naoko never forgot that and considered Jiro their “knight in shining armor”. So, when the two finally meet again after all those years, it’s only natural that a romance would blossom between them!

There’s not much more I wanna say about the film or their relationship because I don’t wanna get into spoilers. You’ll have to watch the film yourself to find out. So basically, I really enjoyed the film and do believe it’s as good as people say!

The animation is as beautiful as one can expect from Studio Ghibli! The English dub is pretty good too; I don’t think I would have recognized Joseph Gordon-Levitt’s or Emily Blunt’s voices if I didn’t know beforehand! And as someone who was formerly studying aerospace engineering, I enjoyed being able to understand a lot of what Jiro and the other engineers in the movie were doing and talking about.

I also liked the message at the beginning of the film which said that there is more than one way to be involved in any particular field. For example, I want to get into the animated feature film industry later in life, but I have no skill in animating or even drawing. However as a computer science major, I feel I can still get involved in that industry since so much of it involves computers now!

Last, but definitely not least, the romance between Jiro and Naoko is sooooooo sweet! Call me an old romantic softie, but there’s something so pure and innocent about their romance in the film! There was nothing lustful about it; it was just pure love which stemmed from an act of selflessness! You don’t see that often these days! Come to think of it, almost all the Studio Ghibli films (that I’ve seen) have incredibly sweet romances! They sure know how to do love stories!

So, was there anything that I didn’t like? Well, the biggest problem I have with the movie is that there isn’t all that much going on. The movie is quite slow-paced and the only plot points involve Jiro doing engineering work and courting Naoko. That’s about it…well, that’s about it without giving away spoilers. This “slow-moving, but pleasant” trope is something I’ve seen in other Studio Ghibli films as well such as From Up on Poppy Hill and Whisper of the Heart. So while the film is never boring, it’s slow-paced and I can understand why some people won’t like it because of that reason.

But, in the end, I did think it was a great Studio Ghibli film! Do I think it should have won the Best Animated Feature Oscar instead of Frozen? Hmm…I’ll havta think about that some more, but I wouldn’t be surprised if my answer turns out to be, “yes”!