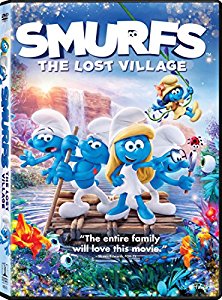 In 2011 and 2013, Sony Animation gave us two live-action films based on the Smurfs. Like many films of the same style, all the actors were live-action, but the main characters were animated. And like many of these kinds of films, they weren’t critical successes at all, but made money at the box office!

So when it came time to make a third film based on the Smurfs, they decided to make it a fully animated reboot pretty much ignoring that The Smurfs and The Smurfs 2 ever happened.

The result of that decision is Smurfs: The Lost Village. Read on to know what I thought of it! (Beware, there may be spoilers ahead!)

Smurfs: The Lost Village re-introduces us to the characters of the Smurfs: blue magical creatures with white hats who all have a dominant trait present in their name: Papa Smurf, Brainy Smurf, Hefty Smurf, Clumsy Smurf, Table-Eating Smurf, etc.

As you’ve noticed, they all are males, except for one: Smurfette. She’s the only female of the bunch and that is because she’s not a real Smurf; she was a creation of the evil wizard Gargamel, voiced by Rainn Wilson, who created her to find the elusive Smurfs and their village. But due to the power of love (magic?) present in the Smurf village, Smurfette, voiced by Demi Lovato, overcame her evil and lived happily with the rest of the Smurfs.

Well, happily enough. She’s recently become disheartened as she doesn’t know what her dominant trait is. As the film goes on, she tries to solve the answer to this question while trying to warn a newly-discovered all-female Smurfs village about Gargamel coming for them.

So this movie was…okay, I guess. It’s not frustrating, it’s not harmful, it’s just…okay. While I have issues with people referring to animated films as “kids’ films” (as there is obviously a difference between a “family film” and a “kids’ film”), Smurfs: The Lost Village is a kids’ film. So while this film is better than its predecessors, this one was definitely aimed for kids, whilst its predecessors were aimed for families.

The best thing in the film, by far, was the gorgeous CG animation! The film is just booming with rich colors that fit the Smurfs universe perfectly! And everything is incredibly fluid and pleasing to the eye!

Summing up, if you like the Smurfs and wanna see this film, you won’t be disappointed. Just don’t expect this to be an Academy Award-nominated film!