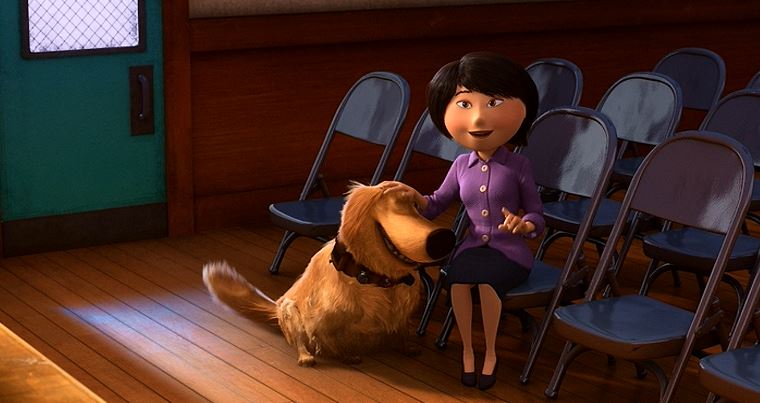 Today we look at a forgotten/minor character from Pixar’s 10th film and the 2nd animated film ever nominated for Best Picture at the Academy Awards, Up.

As you all know, I’m not a big fan of this film.

Granted, I appreciate it a lot more now than I did in the past, but it’s still not a film that I would rush to go see again.

For those of you who don’t know, Up tells the story of an old man, Carl Fredricksen, voiced by Ed Asner, who has become somewhat embittered after the death of his lifelong wife, Ellie.

After an accident occurs which causes him to have to move out of his lifelong home, he decides to fulfill one of his late wife’s last wishes. Which wish is that? The wish of moving their house to the cliffs of Paradise Falls (a fictional falls in South America). How does Mr. Fredricksen accomplish this task? Well, he blows up literally hundreds of balloons and uses them to float him and his house to South America.

Everything seems to go fine, until Mr. Fredricksen realizes that he has a young stowaway aboard the flying house. A Boy Scout-like Wilderness Explorer boy named Russell, voiced by Jordan Nagai, accidentally got swooped up in the ascent. Mr. Fredricksen isn’t too happy about this and attempts to land the house so that Russell can go back home, but external forces prevent this from happening and Russell just has to go along for the journey.

This brings me to my forgotten/minor character: Russell’s mother. You see, it’s evident that Russell, while on his South American excursion, has been away for a long time! Why is this evident? Well, it appears that Mr. Fredricksen and Russell are from the US and it’ll take quite a long time to travel via floating house to reach South America. Unless this is one of the many plot holes that this movie has along with why Mr. Fredricksen and explorer, Charles Muntz, voiced by Christopher Plummer, seem to be the same age?

The point of the matter is that I’m sure Russell’s mother must be panicking and getting the entire police force to find him! His picture must be in every news paper and on every news channel! When Russell returns back home with Mr. Fredricksen, I’m sure that Mr. Fredricksen would have been arrested or at least brought in for questioning!

Another alternative is that maybe Russell’s mom is a bad mom who just doesn’t notice that Russell has been missing for a long time, or even worse, doesn’t care.

Anyway, this mysterious figure of Russell’s mom is someone worth pointing out, hence I choose her as the forgotten/minor character of this film!