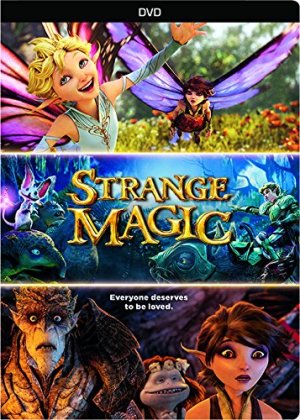 Oh boy, this movie is…I mean…it’s not as….you would think….I found it…ok, let’s just take this one step at a time. Hopefully that would make things easier.

Strange Magic was the 2015 animated film that I had absolutely no interest in seeing! It was a Lucasfilm production that became Disney’s property after Disney bought Lucasfilm. Disney kinda didn’t focus much on this movie and released it via Touchstone Pictures and the movie was a flop at the box office. When I saw the trailer, I thought it looked like nothing more than a dirtily-animated Epic knockoff, hence I had no desire to see it.

One day, an elf named Sunny, voiced by Elijah Kelley, heads out into the dark forest to find the Sugar Plum Fairy so that she can make a love potion for him. When the Bog King hears of this, he invades the fairy kingdom and kidnaps one of the princess fairies, Dawn, voiced by Meredith Anne Bull.

Dawn’s elder sister, Marianne, voiced by Evan Rachel Wood, then heads into the dark forest in order to rescue her sister from the Bog King.

I don’t want to give away too much more as this pretty much summarizes the first hour of the movie. As you can see, the plot isn’t all that great, to put it mildly, but the film does have some good points. First of all, the animation is pretty good for something that’s not true Disney or any of the major animation studios.

Secondly, this is a jukebox musical. For those who don’t know, a jukebox musical is a musical in which the characters sing songs, but instead of singing original songs, they sing pre-existing songs. Some of the songs included are Can’t Help Falling in Love, Three Little Birds, Stronger (What Doesn’t Kill You), I Can’t Help Myself (Sugar Pie Honey Bunch), Tell Him, and Wild Thing. While I don’t agree with all the applications of these musical numbers (some just seem to come out of nowhere), I actually am fond of this idea of a jukebox musical and the film does provide some enjoyable musical moments.

At one point, the film was supposed to be entirely sung, no spoken dialogue whatsoever. Rather, the characters would just be spewing out famous songs as their dialogues. I honestly wish they had done that because it’d have been a great achievement to tell an entire film only through pre-existing songs!

Summing up, is this film good? Eh….no, I and nobody else in their right mind can call this a good film. But…