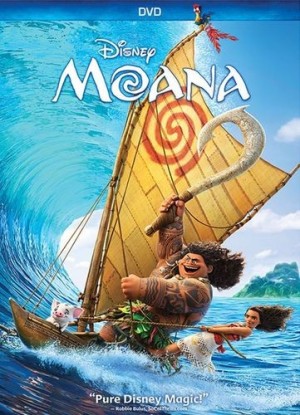 Of all the 2016 animated films that I’ve seen, this one is definitely my favorite!

Let me give you some background. Disney was planning to release 2 animated films in 2016 as part of their official Canon: Zootopia and Moana. Ever since I first heard about it, I was way more excited for Zootopia than I was for Moana, although everyone else I knew had the opposite feeling! Zootopia was a sort of anthropomorphic animal mystery/crime/buddy cop movie that I was super excited for whilst we didn’t know much about Moana other than it would be another Disney Princess film, this time a Polynesian one.

Moana is the 56th film in the animated Disney Canon and directed by the familiar Disney duo, John Musker and Ron Celements. The film centers around a Polynesian girl named Moana, voiced by newcomer, Auli’i Cravalho. Moana is the teenaged daughter of the chief on the island of Motunui. She has always had a desire to leave the island and sail the ocear ever since she was a baby, but that’s the one rule that her father, voiced by Temuera Morrison, has: Nobody leaves the island as the ocean is a dangerous place!

Moana is upset about this, but she obeys her father and learns all she can about being a leader in her community. And she does a pretty good job of that! But when all the fish seem to be drying up, the only way this problem can be fixed is for someone to go find the legendary demigod, Maui, voiced by Dwayne Johnson, who’s trapped on an island somewhere and have him return the “heart of Te Fiti” (a rock that he stole from an island 1000 years ago). This is where Moana realizes that this journey is meant for her and her sea voyage commences despite her father’s wishes!

I don’t wanna give away any more of the plot than that! The film in its essence is a “road trip” or “sea voyage” movie. Moana and Maui have to travel the sea together to fight various baddies and learn to get along with and respect each other throughout. I’m usually not a fan of journey movies which was one of the main reasons why I disliked The Croods, but this movie does it pretty well! There are enough distractions on the journey to keep us entertained and just enough to not lose focus of the main plot.

The main characters are likable and not perfect at all which is even better! Moana isn’t someone who’s trying to abandon her duties to follow her dreams, rather she follows her dreams when it has to do with her duties. Also, she’s not someone who’s perfect at everything she does. It takes her almost the entire film to master the art of sailing. Maui is someone with a bit of an ego, but nowhere near Gaston’s level. At first, he does things for the attention, but later does them for Moana or because they need to be done. They both are happy, they both get sad, they both get mad, etc. They’re just really likable characters!

I’ll just mention one word to talk about the animation: WATER!

The music is done by Lin-Manuel Miranda along with Opetaia Foa’i and Mark Mancina. And it is amazing and fits with the overall culture of the people! I haven’t loved a soundtrack of a Disney film this much in a long time! I mean, Frozen‘s songs were great, but this movie takes the cake. Most people seem to love the necessary “I Want” song of Moana called How Far I’ll Go. And honestly, I don’t love this song as much as everyone else. There are at least 3 more songs I love better: We Know the Way (which is my favorite), You’re Welcome (a catchy number sung by Dwayne Johnson), and Shiny (a big-lipped alligator moment, but the catchiest song in the film, nonetheless). Check out my friend, YouTuber Zora Catone’s version of Shiny:

Does the movie have problems? Yes, it does, but only after multiple viewings do you find them and you have to get really picky to notice them. What are some of the problems? Well, there are some plot points that seem redundant or unnecessary. There are character choices that don’t seem to make that much sense. But overall this movie is really good and like I said, you have to be really picky to find major flaws with it! Does it make my Top 13 Favorite Disney Canon Films list? I havta think about that some more, but it’s definitely a good movie that you should check out ASAP if you haven’t already!

P.S. Also check out a podcast I did with Rachel Wagner from 54disneyreviews on her YouTube channel: