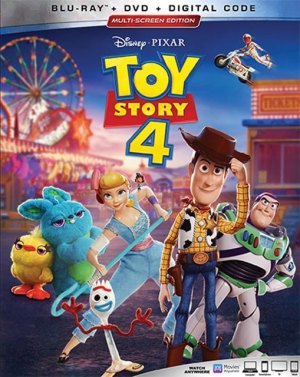 When the news was announced that there would be a Toy Story 4, I, like many people, didn’t know what to think. On one hand, I thought Toy Story 3 wrapped the trilogy up nicely and couldn’t be emotionally topped. But on the other hand, at least it wasn’t a live-action remake of an animated Disney film, am I right?

I went to go see the film in theaters and have recently rewatched it on DVD. So I figured, let me share some of my thoughts with you all. Just be warned that there are spoilers!

Toy Story 4 takes place after the events of Toy Story 3 (as one would rightly assume). Woody (voiced again by Tom Hanks) and the gang are now the property of soon-to-be kindergartener, Bonnie (voiced by Madeleine McGraw). She enjoys playing with most of her toys, but tends to not care much about Woody which hurts his feelings although he denies it.

Nevertheless, he’s determined to fulfill his purpose as a toy and be there for Bonnie. He even goes as far as to sneak into kindergarten with her on orientation day and “inspiring” her to create a new friend from a spork, Popsicle sticks, and googly eyes names Forky (voiced by Tony Hale).

Forky longs to be trash though while Woody tries to make him see his purpose as Bonnie’s toy. This conflict continues as Bonnie and her parents go on a road trip leading Woody to an antique shop and a reconnection with his love, Bo Peep (voiced again by Annie Potts).

So, I did enjoy the film, but it’s my 3rd favorite of the four (I’m probably the only person who doesn’t really like Toy Story 2). I love the gorgeous animation which showcases how far along we’ve come from 1995!

I also love the various themes showcased in the film such as purpose, duty, love, personal happiness, and the inner struggle between all of them. But I also had a few complaints about the themes in the film.

In Toy Story 2, Woody came to the realization that his purpose as a toy, to be there for his owner, was more important than him seeking his own happiness as a museum exhibit. In this film, it seems Woody makes a complete 180 and comes to the conclusion that his own happiness is more important than living for another. Maybe the argument can be made that he’s no longer needed by Bonnie in this film whereas in Toy Story 2, he was still needed by Andy. But in this film, he doesn’t even try to find another owner to fulfill his purpose; he simply decides at the end of the film to follow his heart and be with Bo Peep. I’m not saying this is a bad message, but it’s just odd to see two films in a series where a character learns completely opposite lessons from them!

I also wasn’t a huge fan of Bo Peep’s character. Her character changed from the demure one we knew in the first two films to a more “strong” (I really hate that word as I feel it’s just a buzzword without any meaning) personality. It’s not as drastic a change as I was expecting, but it does seem a bit out of character for her. I am happy to see her reunite with Woody at the end of the film though!

In terms of the new characters, there were many that I liked including the Canadian crash daredevil, Duke Caboom (voiced by Keanu Reeves) and the hauntingly terrifying, yet enjoyable mute ventriloquist doll, Benson (and the others whom I’m assuming are also named Benson).

I didn’t care much for Ducky and Bunny (voiced by Keegan-Michael Key and Jordan Peele, respectively). And then there’s the “villain”, Gabby Gabby (voiced by Christina Hendricks). She started out as a really sinister villain in the sense that she seemed to be this innocent doll whose voice box was broken, but sought to get Woody’s by any means possible. In the end, she uses her powers of persuasion to get Woody to voluntarily give up his voice box to her. But I still feel that Woody and the gang were way too forgiving of her at the end of the film.

Also, what happened to Buzz? The other main character of this series (again voiced by Tim Allen) seemed to pull a Fred Jones (of Scooby-Doo lore) and just get super dumb in this film compared to how he was in the earlier films. It would have been nice to see him and Woody work together for more of this film, but if we couldn’t have that, couldn’t we at least have Buzz be a bit smarter?

I did appreciate the filmmakers using unused footage of the late Don Rickles for Mr. Potato Head rather than recasting the role. Granted, they were only 2-3 generic lines, but it was still a nice gesture.

Summing up, I did like the film although I do have a few criticisms. If you’re a fan of the first three films, this film won’t make you lose your loyalty to the franchise. But I wouldn’t recommend someone watching this film first if they haven’t seen the other three. I mention this because I actually know someone who has done this.